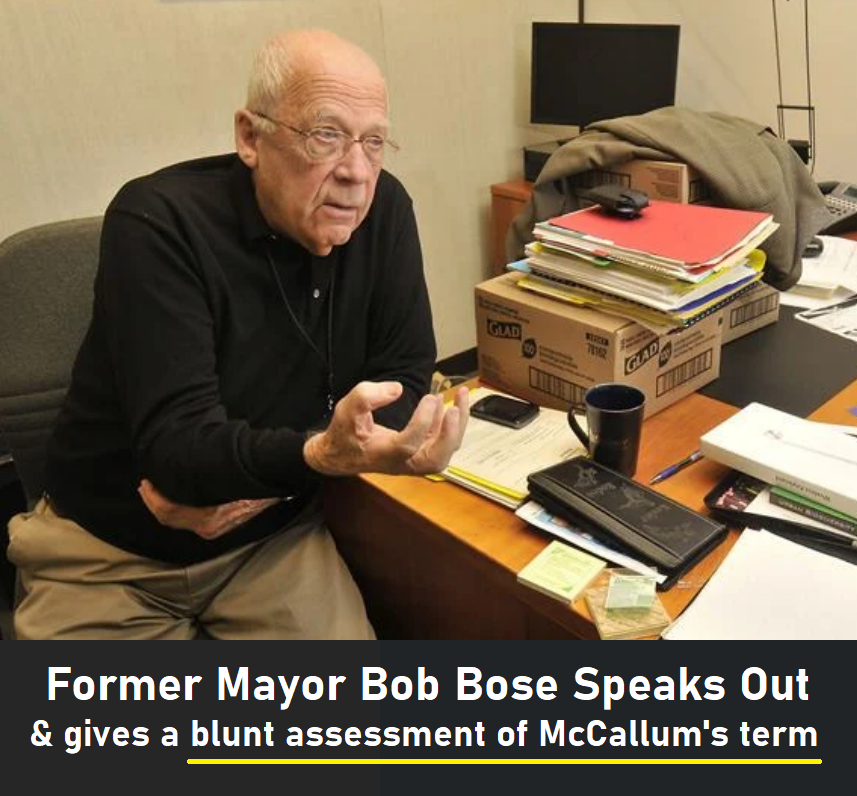 “… people are totally cut out from being engaged in council business, and that’s regrettable.”

Gloria Macarenko: [00:00:00] Well Surrey’s Mayor Doug McCallum just keeps on fighting through the storm of controversy surrounding Surrey Council this week. Controversy that some say is self-created. Mayor McCallum announced yesterday that he will be absent as chair of the Surrey Police Board until after the election. There are two meetings between now and the election, and this announcement came after drama erupted at Monday’s council meeting, that’s when a motion was brought up calling for him to step aside as mayor. Mayor McCallum talked with the Early Edition Stephen Quinn this morning about his decision not to attend police board meetings.

McCallum: [00:00:37]  I have been saying that from day one. I do really believe that being both mayor and chair of the police board is, you put yourself in a very big conflict because of financial, the city funds the police board and then the police board takes that money and provides the services. And because of that legislation, which I actually put a lot of input into that recommendation, I believe strongly that mayors and chairs of police board are in conflict.

Gloria Macarenko: [00:01:13] Okay. That was Mayor Doug McCallum speaking on CBC Radio this morning. So for more, we have reached a former mayor of Surrey, Bob Bose. Bob Bose. Hi there. Good afternoon to you.

Macarenko: [00:01:24] So what are your thoughts on what you just heard? Is a mayor in conflict as chair of a police board?

Bose: [00:01:31] I don’t think so. Honestly, the mayor or any other member of council can provide valuable guidance for the board. But if whoever’s in the chair or any member of the is in a genuine conflict of interest, they should be able to recognize that they have a personal interest in the matter before the board. They should, in fact, recuse themselves from the meeting. But the mayor doesn’t have a vote on the board. And I can’t imagine a situation where the matters before the board would place the mayor in a conflict. I do think there’s another issue that may be more important. I don’t think a mayor should try to fulfill that role. The mayor has got enough to do without being a chairing a police board and being engaged in all its committee work.

Macarenko: [00:02:32] I see. Okay. So, tell me more about that and your observations about what’s been transpiring at Surrey Council.

Bose: [00:02:38] Well, the mayor is under a pale because of the criminal charges that have been brought before him. And I think his credibility and his credibility in terms of chairing the police board are serious issues. He should take leave of absence from council. I think the controversy that we’re observing now has got a lot to do with his continuing in a role that he should not continue in.

Macarenko: [00:03:21] You’re talking as mayor. So, I know we’re moving a little bit away from the conversation about the mayor’s sitting as head of the police board. But I mean, are you aware of Surrey City Council in any way making a submission to the Committee for Police Reform?

Bose: [00:03:38] No, it did not. I have read the report that was tabled by the Special Committee on Police Act, Reform and Surrey Council did not make a submission to that committee, nor did it indirectly through the Union of B.C. Municipalities. And the mayor never appeared before the committee, and to my knowledge, didn’t carry on a discussion with members of the committee. There are three MLAs from Surrey who serve on the committee and to my knowledge he’s not dealt with them at all.

Macarenko: [00:04:23] All right. Well, let’s go back to Monday’s council meeting. I think that lasted a total of 7 minutes after there was a motion brought forward that the mayor should step aside until after the election, until after his court appearance as well. Do you think that meeting should have been postponed as it was?

Bose: [00:04:41] No, I don’t think that was necessary at all. There was the issue of him stepping aside, was raised on a point of privilege. And he should simply have allowed that to be expressed. And then, If you wanted to, in fact, he really needed to respond to it, and then he should have carried on with the minutes, with the meeting until the issue was delt with. And I don’t think that there was any cause for the meeting to be postponed or to be adjourned at that point. I think if he had handled them, he should have been able to handle that meeting without taking a recess. And then, in fact, adjourning the meeting, any capable person in the chair could have handled that situation.

Macarenko: [00:05:40] Now, in the interests of transparency, we should point out that you publicly support mayoral candidate and the current city councillor, Brenda Locke. You’ve been active in giving her advice, but you have had issues in the past with how Mayor McCallum and the Safe City Coalition conduct council business. Can you take us through some of that?

Bose: [00:06:02] Well, I don’t think the mayor conducts the meetings well. He doesn’t allow exchange public hearings between the council members or staff and people wishing to make presentations before council. He doesn’t. He denies members all the opportunity to put notices of motion. He rules them out of order, which is an absurd procedure. He has failed over the over the years to clearly state who voted what way on council. So the public doesn’t know what’s going on. It’s just a rotten chairman. That’s all I can say.

Bose: [00:06:55] Oh, no, no. Listen, I had nine years as Surrey’s mayor and the public wanted a change. And that’s perfectly okay with me. They turfed me out and I accepted that there was no I held hold no grudge with McCallum over that.

Macarenko: [00:07:19] Okay. Well, you know, we have heard from business leaders in Surrey, we’ve heard from several councillors over the past week. How do you think the City of Surrey has been impacted over the last few years under the McCallum Government?

Bose: [00:07:34] Well, council has not properly engaged the community. They, you know, the whole question of transition to city police forces was undertaken without a proper community involvement. People are frustrated by that. There’s a lack of transparency in terms of the rationale for making that change, in terms of the financial impact of such a change. And people are really totally cut out from being engaged, being engaged in council business, and that’s regrettable.

Macarenko: [00:08:22] You know, you’ve been out of politics for some time now, even though, as I point out, you’re supporting Brenda Locke for mayor in the next election. But what is your sense of this particular moment in time in Surrey’s history? How will this term be remembered, do you think?

Bose: [00:08:40] Well, I think it’ll be remembered as a council that’s been chaired by somebody who’s incapable, who’s unfit to hold office. And that’s the center, that’s the core issue here. It’s not. You know, there are members of council who are capable and trying to do their jobs, but they’re being interfered with, or at least not permitted by the mayor and his supporters to conduct the business of council.

Macarenko: [00:09:19] Interesting to talk to you again this afternoon. Thank you very much.

2 thoughts on “Surrey Mayor Controversy: a Former Mayor Speaks Up”