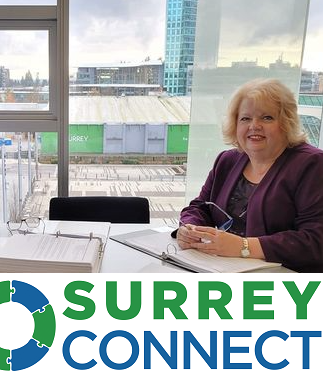 Surrey, B.C.: Brenda Locke will continue pursuing her Notice of Motions from Surrey Council meetings of September 13 and October 18.

The September 13 Notice of Motion concerns Laurie Guerra, ostensibly acting as proxy for Mayor McCallum, reading into the record that seven members of the public be prohibited from participating in council meetings. One of the named, Debi Johnstone, was forced to leave Surrey City Hall on October 18. RCMP was called to carry out the task.

Brenda Locke’s motion points out there are likely no provisions in parliamentary rules of order for motions to be introduced by proxy. They may be considered to be improperly introduced, out of order, and without effect. Councillor Locke is calling for an independent parliamentarian to be engaged to review this and advise Council of the propriety of the proceedings.

Councillor Locke’s October 18 Notice of Motion concerns Translink’s 10-year timeline confirmation that the Surrey-Langley Skytrain will not be completed until 2028, which contrasts with the 2024 timeline provided by Mayor Doug McCallum.

“Significant work is being undertaken on Fraser Hwy, closing off part of that road and disrupting traffic,” says Locke.

“Cost escalations from the original 1.6-billion-dollar prediction are seen to be significantly under budget and now budget figures are seen to be closer to 4 billion dollars,” she adds.

“Also, the last provincial government budget did not recognize Treasury Board approval for the Surrey-Langley Skytrain line.”

Therefore, in her motion, Councillor Locke has asked staff to provide council with a detailed corporate report of the current cost estimates, and the timeline for the project, including the necessity to have the Fraser Hwy Road disruption now, when the improvements are not required until 2028.

Additionally, Councillor Locke is asking that the spirit of public engagement be considered, and citizens be allowed to call in to council meetings as attending in person is not possible for some due to the challenges of COVID-19.