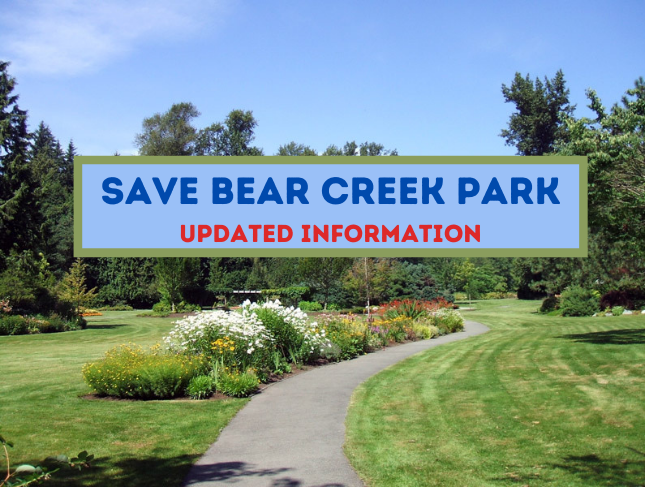 In 2021 McCallum’s Safe Surrey Coalition decided to bring it forward and fast track it. Doug Elford moved the proposal and Mandeep Nagra second it under the watchful eye of Doug McCallum. With their majority, they believe they can just push it through.

We polled to see if the public’s perception has changed. The poll was advertised on Facebook from March 11th to March 19th, 2021.  Over 100,000 people – selected by Facebook via their advertising algorithm – were invited to participate. It was open to all Surrey residents over the age of 18.

The Results of our Poll 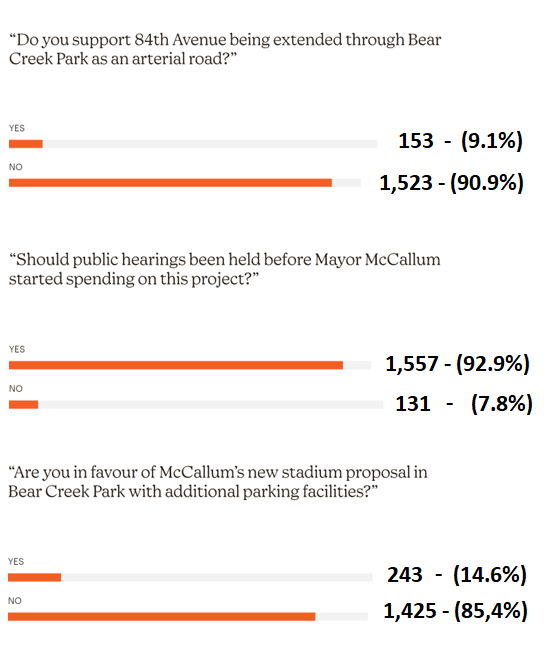 When you look at the data there are three key things to be aware of.

First, the year of the data. They use old data.

Second, the difference between a car crash and an accident involving injury or fatalities.

Third, is the impact on the parkland.

King George and 88th isn’t the most dangerous intersection in Surrey. In fact, over the last 6 month period, there were a dozen more dangerous insections.

Below are the official statistics. 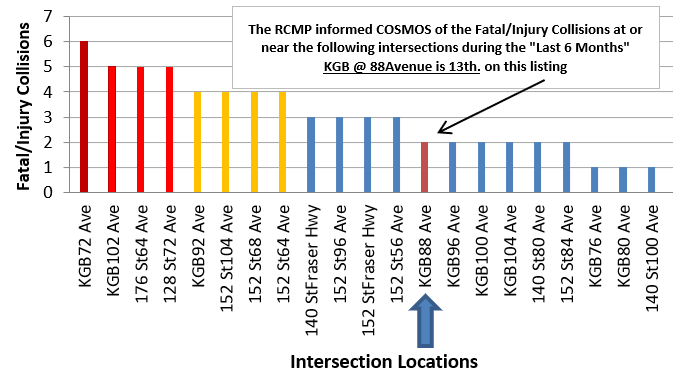 Now there are twelve other intersections that have more pressing needs for safety improvements.

For a little older data see this CBC article that covers the three-year period prior to June 2019. King George and 88th Ave. is 10th on that list. 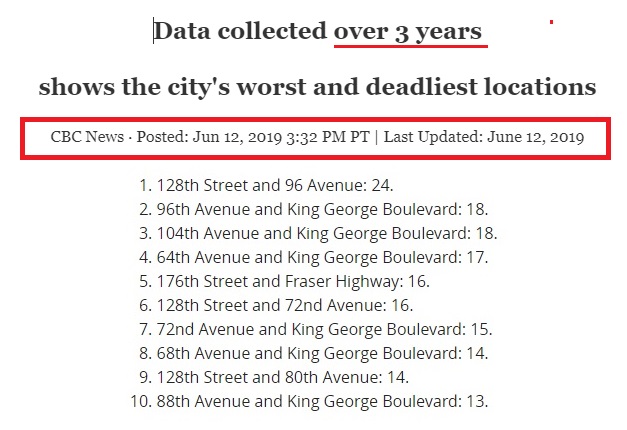 The Safe Surrey Coalition is using older data going back to 2014 and they don’t seem to differentiate between crashes and injuries and fatalities.
.
Also, the RCMP point out risky behaviours like impaired driving and excessive speeding contributed heavily to the serious accidents. It is unclear how the 84th Avenue expansion will mitigate these behaviours.
.
The Safe Surrey Coalition has also refused to increase the number of RCMP officers as the city grows. It seems obvious that more policing resources could be directed towards Surrey’s high collision intersections if the RCMP had more officers. Suddenly the Safe Surrey Coalition arrives with a large expensive ‘solution’ to the problem they helped to create. Where is the discussion about other alternatives? When did that happen?
.

This is How the Safe Surrey Coalition ‘Debates” 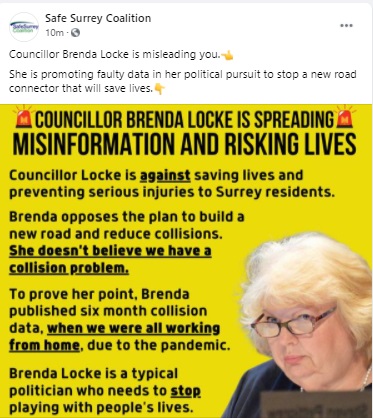 Two reasons why this ad is WRONG

First, Brenda Locke questioning McCallum’s data to ensure it stands up isn’t a bad thing. It is important to make sure decisions are made with the correct data.

Second, it is hard to imagine that the pandemic only affected the 88th and King George intersection. It is safe to assume that all the intersections on the list would be impacted equally. I would suggest that Brenda Locke knows this but McCallum’s Safe Surrey Coalition spin doctors are obviously not as well informed. 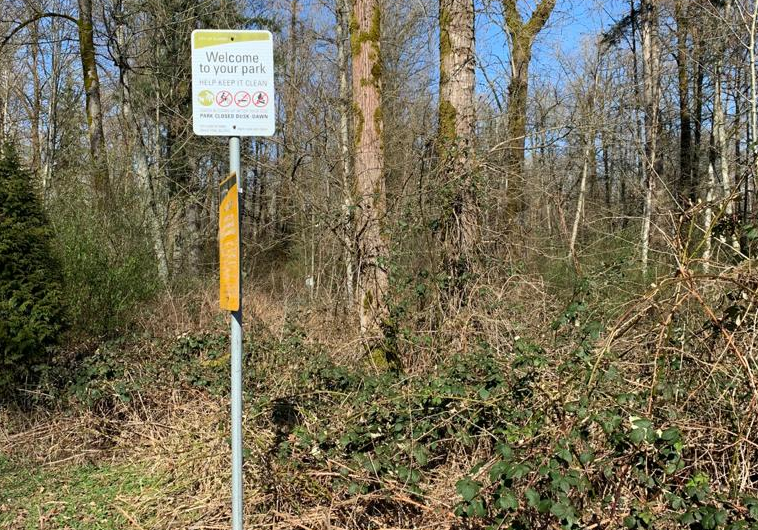 This is where the road is slated to go. SSC Councillor Allison Patton says it isn’t going through the reserve area of the park, however, it clearly will go through parkland (read the sign) and it will cut the existing park area into two separate parcels. See the Google satellite image below.

McCallum’s faithful Councillor Laurie Guerra said no trees will be cut down. Again when you look at the pictures above it’s clear that is obviously misleading.

This is another recent attack ad from the SSC 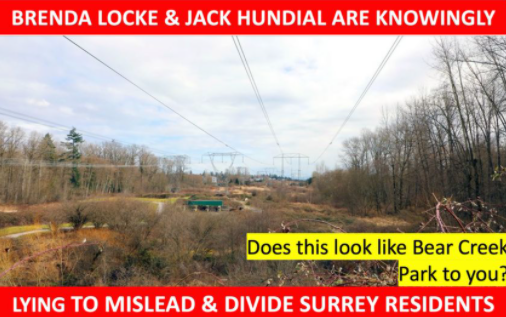 not the whole road – as shown below

Where was the attack ad picture taken?

An up-close look at the area where the road and the hydro lines intersect. 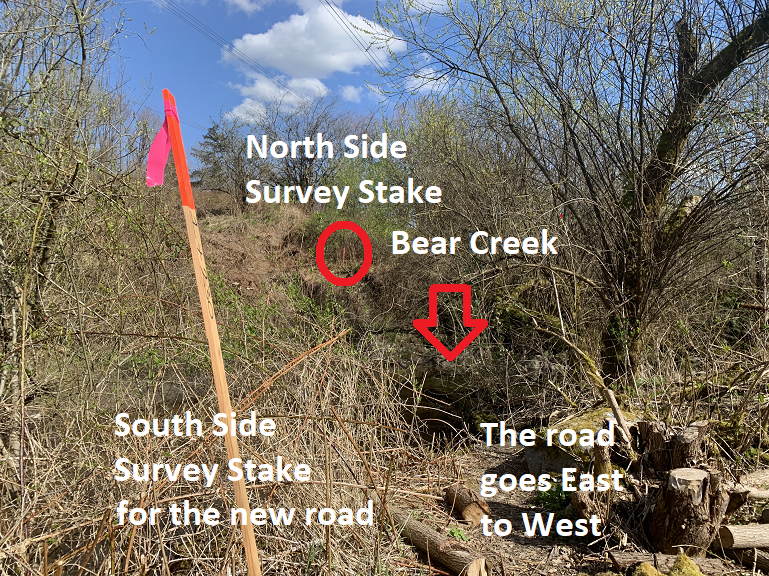 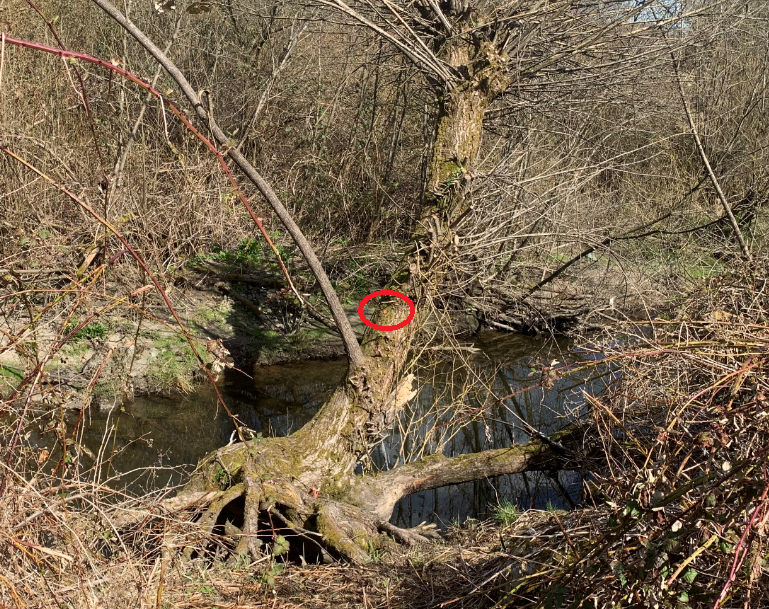 While the SSC attack ad points out that the road (albeit some of it not all of it ) goes under the hydro lines they fail to mention that Bear Creek also goes underneath the hydro lines. The second picture shows a tree tagged apparently for removal. I’m not a biologist but this type of tree often provides habitat and safety for young fish. I invite you to visit this area and see how the south end of the Bear Creek parklands provides habitat for a variety of animals.

Now McCallum says the 88th Ave and King George Highway intersection is more dangerous because of population growth. The data does not appear to back him up, but if it did ….

Why hasn’t he hired more police officers to focus on dangerous intersection enforcement? The province put in 24-hour intersection cameras in 2018, but McCallum and his 4 faithful councillors have not approved any additional RCMP officers since taking office.

As technology improves other roadway enhancements are also becoming available that help to mitigate collisions. Why aren’t those being considered first?

What if the 84th Avenue connector only moves the accidents to the new road?

Why aren’t the citizens of Surrey allowed to have their say until it’s too late?

Delta also says no to this road

It could become the road to nowhere 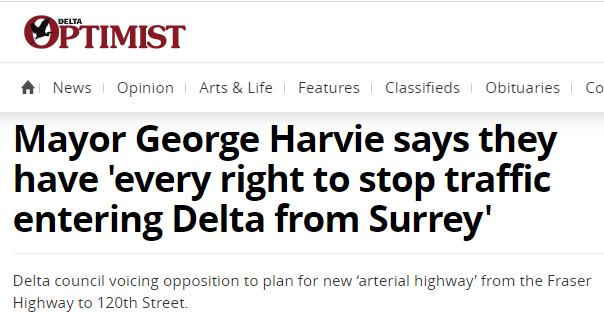