Call for a Policing Referendum 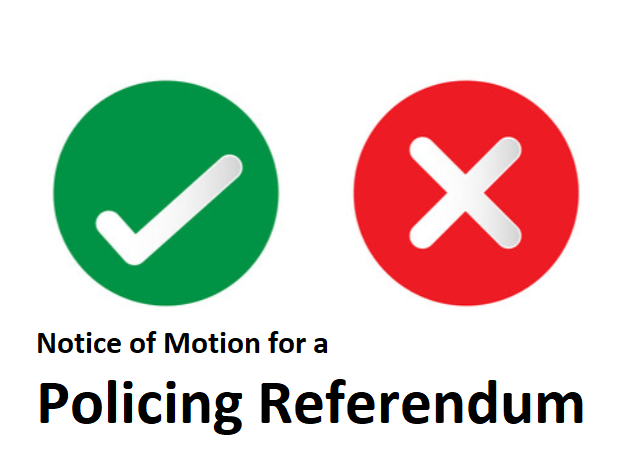 Whereas:  Sir Robert Peel who was known as the father of modern policing states in his 7th principle, that the police are required to maintain at all times, a relationship with the public that gives reality to the historic tradition that the police are the public and the public are the police; the police being the only members of the public who are paid to give full-time attention to duties which are incumbent on every citizen, in the interests of community welfare and existence.

Whereas:  Residents of Surrey on several polls have indicated that they are not in favour of the Surrey Police Service and therefore the essence of Sir Peel’s statement is jeopardized.

Whereas:  It is evident that since the SPS Board was sworn in August 2020 and the Chief was hired in September 2020 the SPS has not adequately engaged or instilled confidence in their vision/model of policing for the residents of Surrey.

Whereas: There is no room for error in Surrey’s Public Safety, the process to date has been rushed and it is important that we correctly rather than quickly to meet an electoral timeline.

Whereas:  The SPS Board finance chair has indicated that they are over budget in every area reported on and, contrary to proper accounting principles continue to manage a large “miscellaneous” budget.

Whereas:  There has not been an updated budget or plan presented to Council that would address Capital and Operating Costs.

Whereas:  The impact of the Surrey Police Transition to the region and the province has not been established and it is becoming more and more concerning to other local governments. That includes human resource poaching by Surrey and additional costs to all RCMP jurisdictions due to shared services costs.

Whereas:  The Premier has stated: “Surrey Mayor Doug McCallum opened a “hornet’s nest” when he moved to replace the Surrey RCMP with a city-made police force. “I would like to think the people of Surrey would be able to do more than just vote in a municipal election on an issue as important as public safety,” he said. “During a municipal campaign there are a range of issues, and to point to one or two and say, ‘This is my mandate,’ I think does a disservice to the broader public who maybe didn’t participate in the election.”

And Minister Harry Bains has said “There has to be transparency, there has to be accountability,” Bains said. “People need to know what the impact will be, both financially and security-wise and safety-wise, and how the transition will take place. I think it is up to the City of Surrey to explain to the people of Surrey and answer all those questions in a transparent way, and then I am expecting that every citizen expects that.”

Whereas:   Unlike with the City of Richmond and more recently the City of Red Deer, Alberta, there has never been a Feasibility Study, Cost/Benefit Analysis, or a Regional Impact Study vis a vis the Surrey Police Transition.  Once reviewing the independent third party review, both Richmond and Red Deer Council’s elected to keep and support the RCMP as the contract police in their cities.

Whereas:  The new SPS Chief himself recognizes that Surrey requires more police officers now and in the future.

Whereas:  Given the level of new federally mandated public safety initiatives from the new gun legislation to the importation of ammunition and reclassifying over 1,500 firearms, the public believes that it is risky to have this transition with all these unknown variables to public safety in Surrey’s transition.

Whereas:   The long-term health and economic impact of COVID-19 are unknown and therefore now is not the time to move forward on this transition.

Whereas:  Experts are saying that the capital cost to change over police departments will cost Surrey taxpayers more than $300 million dollars in capital costs and the increase in policing operational costs will be over 50% higher than it is with the RCMP.

Therefore, be it resolved that the City of Surrey conduct a referendum concurrently with the next local government election on October 15, 2022 to determine once and for all the public support to continue to develop a Surrey Police Service.