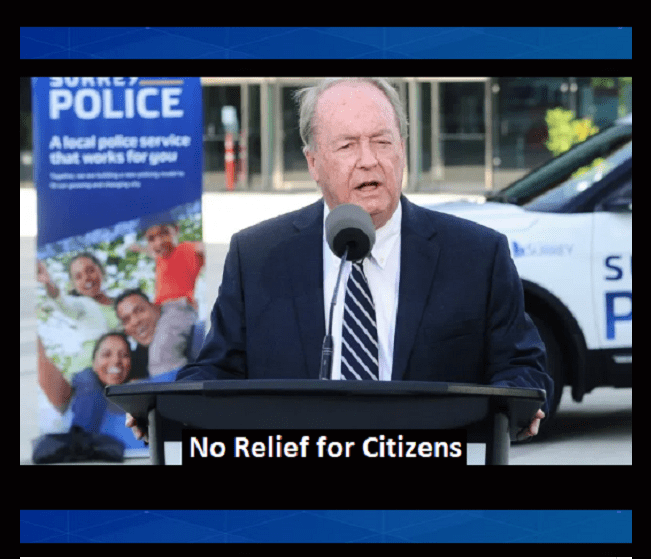 What is McCallum Thinking?

“We’re all finding ourselves in a time of incredible financial pressure,” said the Union of B.C. Municipalities president, Maja Tait ... the mayor of the District of Sooke on Vancouver Island, is canvassing the organization’s membership on their needs. “ … households and businesses are caught in a severe financial crunch and they’re hurting,” Tait said.

CTV-BC Cities across Metro Vancouver are scrambling to find a way to make up for lost revenue and pay for essential services in the wake of the COVID-19 pandemic. Municipalities are sandwiched between the high costs of managing the emergency and provincial laws that bar them from borrowing money without special permission.

“The only way we can stay afloat is with the help of the federal and provincial governments,” Vancouver Mayor Kennedy Stewart said. “Otherwise, local governments will be forced to take drastic measures that will hurt residents and businesses and significantly slow any post-pandemic economic recovery.” Kennedy Steward called a second press conference to warn about the consequences of potential for property tax defaults on municipalities.

Doug McCallum in a press release less than 18 short months ago McCallum said Surrey’s debt load was “simply untenable and frankly, irresponsible.” He claimed Surrey was over 514 Million Dollars in debt at the time.

Recently on April 15th, 2020 McCallum issued another press release and estimated that the COVID-19 crisis will add approximately another 40 Million Dollars to the debt this year.

Reality Note 1: his estimate of Surrey’s additional debt could go much higher if the crisis drags on.

Reality Note: 2: his estimate of accumulating debt could go way higher if some citizens default on their property tax payments. This is something Mayor Kennedy Stewart in Vancouver is deeply concerned about.

Many factors are unknown at this time. It is simply premature for McCallum to make optimistic claims of only 40 Million Dollars in additional debt. It could easily be much higher.

But, McCallum is drawing his own conclusions because he wants to go full speed ahead with his 129 Million Dollar pet project – the Police Transition. This is despite overwhelming community opposition to his Surrey Police Force AND Surrey residents’ urgent needs for more COVID-19 relief.

When Surrey’s untenable debt load gets worse McCallum simply changes his narrative and carries on. He intends to spend 129 Million Dollars on his police force no matter what.

Jack Hundial Surrey City Councilor – Introduces a motion to support economic recovery. “As a result of the COVID-19 pandemic, that all Class 1 – Residential, Class 4 – Major Industry, Class 5 – Light Industry,  and Class 6 – Businesses have their Temporary Operating Permits extended for a period of 2 years without having to re-apply or pay additional fees to the City of Surrey for this extension to support them, their employees and families in their economic recovery.” Doug McCallum ruled it out of order

Brenda Locke Surrey City Councillor – Introduces a Motion to re-evaluate City expenditures “Given the staff and financial resources required to respond and manage the COVID-19 Emergency, all non-essential project work that requires City of Surrey expenditures, other than regular maintenance of city assets, be paused until we have a better understanding of the fiscal implications that COVID-19 will have on the City’s resources and our ability for economic recovery. This motion includes but is not limited to the police transition.” Doug McCallum ruled it out of order

Locke challenged his ruling and then McCallum called for his 4 devoted councillors to vote and support him. Elford, Guerra, Nagra and Patton all dutifully voted against the challenge – to no one’s surprise.

Cites are in crisis across Canada. Surrey Mayor Doug McCallum is missing in action on the critical financial issues. In fact, at the April 13th council meeting, he declared 3 Notices of Motion out of order. They would have started the critical financial discussions Surrey needs, but McCallum was not interested. Councillors Elford, Guerra, Nagra and Patton all voted to support McCallum in shutting down the discussion.

The truth is clear – Surrey can not afford McCallum’s pet project – not before the COVID-19 crisis and definitely not after!